For 100 years and five generations

Moore Furniture has served the people of Central Washington. Originally located on Mission Street in Wenatchee, the store sold everything from drapes to cast-iron stoves. Founders Edwin and John Isenhart owned and operated the business until Ed's son-in-law Kenneth Moore and his daughter Averill took over operation in the 1930's.

In 1941, Moore Furniture opened a store in Ephrata, which was a small rural community at the time, but Kenneth saw its potential for growth, being a county seat and the site of an army base. As the town grew, the Ephrata branch became the more successful of the two stores and the Wenatchee branch was eventually closed.

Kenneth and Averill's son Lowell took over the family business in 1956 and managed it for 40 years before handing it over to his sons Mike and Kelly in 1996.

In 1999 the business moved to its current location at 328 Basin SW, formerly a Safeway store. This new facility greatly expanded the showroom floor space to over 20,000 feet, allowing for the display of a much larger selection of products.

Today, owners Michael and Kelly Moore continue their great grandfather's tradition of service and quality. The family business has continued to grow as the fifth generation of children have become involved with and keep us up to date with the latest ideas and technology. Offering a wide range of floor covering products as well as upholstered and wooden furniture, they have strived to make Moore Furniture the premiere home furnishings gallery in the region. 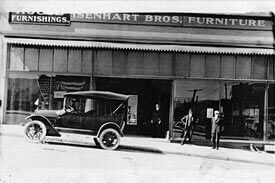 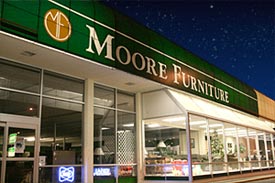 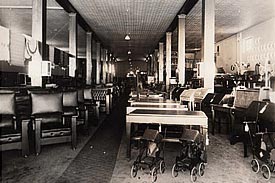